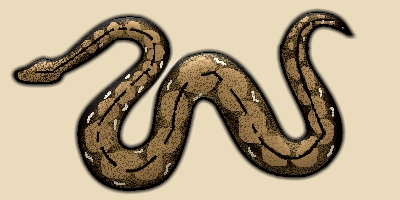 The reticulated python is a very wide ranging species of python found from Southeast Asia throughout the Philippines and Indonesia. Distribution in the Philippines ranges from Basilan, Bohol, Cebu, Leyte, Luzon, Mindanao, Mindoro, Negros, Palawan, Panay, Polilo, Samar and Tawi-Tawi. They live in rainforests, woodland and nearby grasslands. They are also associated with rivers and are found in areas with nearby lakes and streams. Their natural diet includes mammals and occasionally birds. Small pythons (10-14ft) eat mainly rodents such as rats while larger individual feed on Viverridae and even primates and pigs. They are also known to snatch stray chicken, cats and dogs. Because of their relatively large size, they are able to swallow prey up to one quarter their own length and up to their own weight. And like other python, this species are primarily ambush hunters. They wait for their prey to wander within strike range before seizing it in their coils and killing via constriction.

Reticulated python hatchlings are usually around 24” in length. Adults can grow to 6.95m (22.8ft) in length but normally grow to an average of 3-6m (10-20ft) with females typically attaining larger size than males. The color pattern is rather complex geometric pattern which incorporates different colors. Back is typically has a series of irregular diamond shapes flanked by smaller markings with light centers. Variation in colors, markings and size commonly occurs. Smooth dorsal scales are arranged in 69-79 rows at the mid-body. There are deep pits on 4 anterior upper labials, on 2 or 3 anterior lower labials and on 5 or 6 lower labials. Similar to other pythons, they are non-venomous and normally not considered dangerous to humans.